Trilithon: The Journal of Scholarship and the Arts is the official journal of the AODA. It is available for free via PDF or can be ordered as a printed copy (links below). 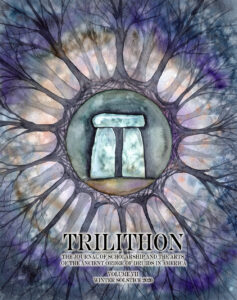 A multitude of reflections on Druidry as a spiritual tradition and daily practice, this issue includes a photo essay of the Faroe Islands by Mark Long, as well as pieces on the path of Druidry by 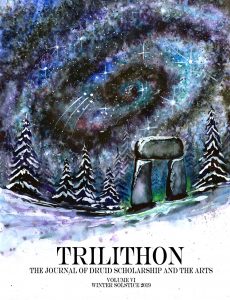 In the sixth volume of Trilithon: The Journal of Scholarship and the Arts of the Ancient Order of Druids in America, authors mediate upon cities as sites of magic and spirit. Contributors include Erin Rose Connor (“Urban Druidry: The Cauldron of the City”), Grand Archdruid Emeritus Gordon Cooper’s (“A Just City”) and Moine Michelle (“The City and the Druid”). The issue also includes works by the AODA’s current Grand Arch Druid, Dana O’Driscoll (“Druidry for the Twenty-First Century: Practicing Nature Spirituality in the Age of the Anthropocene” and “Channeling the Awen Within: An Exploratory Study of the Bardic Arts in the Modern Druid Tradition,” OBOD’s 2018 Mount Haemus Award essay). Other contributors in this issue: Claire Schosser, Archdruid of Fire and Mentor Coordinator (“Gaia and the Cauldron”), Kathryn Opon, Grand Almoner, (“Interconnected and Interdependent”), Nancy Forest (“Carl Jung and Druidry”), Lisa Jacobs (“Reviews of Three Recently Released Books”), and Moine Michelle (“Imbolc Corn Dollies”). The issue closes with the poetry of William Herrington (“Last Butterfly”) and Jason Stieber (“Endlings”); and a cross-communities interview with Byron Ballard, the “Village Witch” of Asheville, North Carolina.

Thank you to all of our 2019 contributors!

In this issue of Trilithon, begin with an interview with Claire Schosser, AODA Mentor Coordinator, who discusses the mentoring program and practices that will help AODA members carry out the work of the grades. We then turn to a piece called “Devotionals” by Dean Easton and a reflection on meditation and the triads by Adam Robersmith, “Three Things Indispensable.” Dana O’Driscoll has offered us two pieces for this issue, “Sacred Gardening through the Three Druid Elements” and “Connection as the Core Spiritual Philosophy in the Druid Tradition.” Max Rogers offers us “A Druid Saturnalia” and Christian Brunner integrates history, research, mythology, and a healthy dose of the creative in “Giving Story to the Gundestrup Cauldron: Drawing on Archaeological Evidence, History, and Bardic Vision.” In “By the Light of the Moon,” William Herrington (Moonfeather) discusses gardening in alignment with moon cycles. Award-winning Celtic studies scholar and musician Síthearan NicLeòid explores the etymology of the word “Druid” in her piece “The Power of Words” and Jason Stieber reviews three books that offer important takes on the wild and the sacred work of rewilding in “Deep Ecology, Human Civilization, and the Wild.”

We are also delighted to introduce new visions for this journal, continuing Dana’s work of honoring the many elements of nature spirituality, as calling, as work, and as manifestation. Two new features appear in this issue. The first is Awenyddion’s Call, an area for literary poetry on Druidic and nature themes. Poems included in this issue are Adam Robersmith’s “Eadha/Aspen” and my own “Solstice.” Crossing Communities offers an interview with a leader, visionary, or practitioner from a community of interest to AODA members. This issue closes with an interview with Jon Cleland Host, editor of Humanistic Pagans, an online community devoted to a paganism “firmly rooted in the empirical world.” 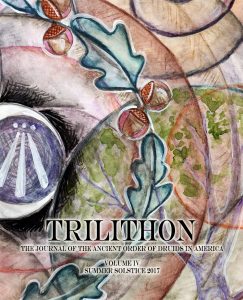 Our fourth volume of Trilithon: The Journal of the Ancient Order of Druids in America features a “connections” theme.  The journal includes work by Grand Archdruid Emeritus, John Michael Greer, where Greer explores a potential Jungian connection for AODA’s core ritual, the Sphere of Protection (SOP). We follow this article with a second piece on how to localize the SOP from Ron Slabaugh. Moving into other connections, Kimberly Kirner presents her ethnoecological study of modern Druids and their knowledge of plants and earth healing. Moine and Patrick Ford both offer us the connections that come through direct contact with nature, which sits at the core of our practices as Druids. Moine describes a wide series of techniques for walking meditation and Patrick presents information on how to go on Druid pilgrimages to sacred sites. The issue also includes a pair of articles on permaculture, a design system and set of practices and ethics modeled on the natural world, connections between humans and nature, by Dana O’Driscoll and Adam Robersmith. We round out this issue with interviews with Adam Robersmith and Dana O’Driscoll and a delightful article on human-divine and mythological connections from Christian Brunner.

Our third volume of Trilithon: The Journal of the Ancient Order of Druids in America features interviews with Archdruids Emeriti John Michael Greer and Sara Greer and with our new Grand Archrduid, Gordon Cooper. Beyond our interviews, we are proud to be publishing a number of unique pieces of Druid scholarship. These include Archdruid of Fire Adam Robersmith’s Druid Adept project, titled “Grounding Through Heaven and Earth: An Introduction to the Nine Hazels Qigong.” This piece is an adaptation of the traditional Qigong movements to Druid practice. We also have the second installment of Tracy Glomski’s “Mabinogi Skies” series that explores the astronomical aspects of the Mabinogion. It encourages us to look to the skies to connect to ancient wisdom and knowledge and offers an original scholarly interpretation based on astronomy. We also have “Th e Song of St. Margaret” by Christian Brunner, which translates and analyzes a poem from the remote areas of Switzerland and Austria and demonstrates its connections to ancient traditions. Dana O’Driscoll’s “Sacred Sites in America” re-envisions the sacred site for an American Druid context and suggests ways of creating many different kinds of sacred sites. Daniel Cureton’s “Saving Our History: Creating Pagan Archives” explores how to create digital and print archives of materials that can help establish a stronger history for alternative spirituality movements. Finally, Rick Derks shares his insights on staff creation. We also have three pieces that have some connection to gardening and ceremony—Claire Schosser’s “Ecology and Spirituality in the Vegetable Garden” provides insights not only on key gardening methods and her expert analysis of their efficacy, but also spiritual practices for the garden. Maxine Rogers shares her experiences in wassailing her apple orchard, and Will Harrington shares his own gardening insights. As a final offering for this 240 page packed issue, we are reprinting a lost Druid Revival pamphlet titled The Druids and Theosophy by Peter Freeman, which is not available anywhere else at this time.

Our second issue of Trilithon: The Journal of the Ancient Order of Druids in America, showcases original Druid Revival scholarship tracing our historical roots and reenvisioning two of the most important revival texts: the Mabinogion and Iolo Morganwg’s Barddas. Our lead article is a manuscript by Tracy Glomski, who charts connections between astronomy and the First and Second Branches of the Mabinogion. Our Grand Archdruid, John Michael Greer, presents a manuscript examining the historical roots of Iolo Morganwg’s Coelbren of the Bards, providing evidence of its possible origins and demonstrating its divinatory power. A running theme in our tradition, and in this issue of our journal, is sacred interactions with nature. Trees have made themselves an informal theme this year, branching through a series of articles. Mark Angelini’s compelling discussion of spoon carving as a process of initiation with the trees begins this series of articles, followed by Claire Schosser’s experiences in working with elder, Paul Angelini’s description of observation and interactions in a variety of landscapes. Finally, we end the tree theme with Dana O’Driscoll’s article on sacred trees in collaboration with Scott Smith, a traditional English botanical artist. In each of these tree and land focused articles, our contributors share their own experiences with trees while also drawing upon the roots of our tradition providing scholarship, inspiration, and a blending of inner- and outer-world knowledge. Our issue is rounded out with two additional pieces that speak to core of our practices: Jessica Tess’s examination of martial arts and its role with the Sphere of Protection and Daniel Cureton’s essay on ancestral wisdom.

Like Revival Druidry, the topics in our inaugural issue are diverse and represent a range of perspectives and paths. Starting in our roots, we have two articles focusing on the druid revival, including “The Myth of Einigan” by John Michael Greer and a “Blast from the Past” feature from an original nineteenth-century document in its entirety, titled “Letters on Tellurism, Commonly Called Animal Magnetism.” These articles represent some of the foundations upon which our tradition is based, and learning more about our roots can influence our practices and knowledge in critical ways. Moving into the core of daily practice, Sara Greer describes devotional practices in detail, providing information on various ways of engaging in devotional activity, tending shrines and altars, providing various offerings, and the question that stumps many of us-what to do with daily devotional practice when one travels. We also have two articles on the Sphere of Protection (SOP); Tracy Glomski provides a fascinating integration of the sword into the SOP, drawing upon material from the middle ages. Our second article on the SOP, written by Dana Driscoll, examines the energetics and uses for the SOP from her experience. From the realm of the natural world and the ovate path, Paul Angelini encourages us to go out and forage for our own wild foods and medicine and how this foraging practice can seamlessly align with the Earth Path in our curriculum. Dana Wiyninger’s “A Local Ogham: Finding Your Area’s Sacred Plants” connects natural practice with divination; while Daniel Cureton’s “Working through the Animals: Intuitive Bone Divination” explores bone divination within Druidry. Now that the readers have some Ogham and bone tools, we can turn to Lexie Devine’s “Crane Bags and the Druid Revival: A Personal Journey” where she describes the Druid’s crane bag as a working tool and shares the story of her three crane bags.