Our current Grand Grove is as follows: 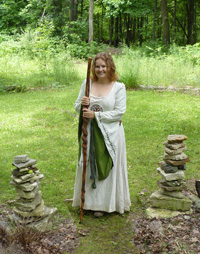 Dana O’Driscoll spent most of her childhood in the wooded hills of the Laurel Highland region of Pennsylvania, making mud pies, building brush cabins, and eating berries. Thankfully, little has changed, and she can still be found searching out tasty mushrooms, gathering herbs, and playing her panflute for the trees. Dana enjoys various kinds of wildcrafting, earth skills, and natural arts and is often covered with paint, dirt, or both. She is a certified permaculture designer and is working towards a more resilient, self-sufficient lifestyle through beekeeping, perennial agriculture, animal husbandry, food preservation, herbalism, and natural building. She also serves as a community organizer to promote sustainable education, food security, and community empowerment using permaculture methods.

Dana joined the AODA in 2007 and, after completing her first and second degrees, earned the degree of Druid Adept in 2013. Her Druid Adept project explored connections between permaculture and druidry.  She has since completed the degrees of Bardic Adept (2017) and Ovate Adept (2020), making her the first Ollave Adept in AODA. She joined the Grand Grove in 2014 as Grand Pendragon and became an Archdruid in 2015. At the Fall Equinox in 2019, she stepped into the role of Grand Archdruid. She served as Chief Editor of Trilithon: The Journal of the Ancient Order of Druids in America for the first four issues. She is also a Druid-grade member in the Order of Bards, Ovates, and Druids, and was chosen as the 18th Mount Haemus Scholar by OBOD for her work, “Channeling the Awen Within: An Exploration of Learning the Bardic Arts in the Modern Druid Tradition.” Dana holds a Bachelors Degree in English, a Masters Degree in Linguistics, and a Ph.D. in Rhetoric and Composition, and by day, enjoys her job as a university professor. Dana is the illustrator and author of the Tarot of Trees(www.tarotoftrees.com) and the Plant Spirit Oracle (www.plantspiritoracle.com). Her writings on druidry and sustainability can be found at The Druid’s Garden (druidgarden.wordpress.com). 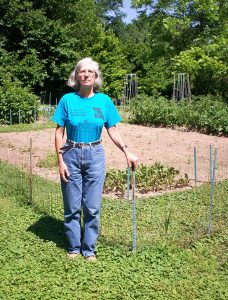 Claire Schosser has followed winding physical, vocational, and spiritual paths during her 60+ years of life. Born and raised in Ann Arbor, Michigan, she graduated from one of Pennsylvania’s small liberal arts colleges with a BS in chemistry. She then took herself and her scientific career plans to the University of Illinois at Urbana-Champaign, where she earned a PhD in physical chemistry. After trying unsuccessfully to change herself to fit into the corporate world in suburban St. Louis, Missouri, she abandoned that effort and paid work in the sciences. She then satisfied her scientific itch as an avocation, taking up gardening and becoming a volunteer and mentor within the Missouri Stream Team program. She enjoys growing vegetables and fruits, native and ornamental plants and trees, and culinary and medicinal herbs. Her blog, Living Low in the Lou, documents her efforts to apply the scientific method and ecological concepts to vegetable gardening and her and her husband Mike’s work to reduce their negative impact on the earth.

Spiritually, she moved from a Presbyterian upbringing to an intellectual interest in mysticism and Zen as a college student. However, it was not until she was in her 40s that she began to practice Zen at a local sangha. Eventually, she realized that her longtime love of nature was calling her to a different, Earth centered spiritual practice, but it was not until she encountered John Michael Greer’s writings on peak oil that she learned of the existence of Revival Druidry and the AODA. After reading The Druidry Handbook and lurking on AODA’s previous Yahoo e-list, she became interested in Druidry, joining AODA as a Candidate in 2012 and becoming an Apprentice in 2014. In 2017 she helped to establish AODA’s Mentor Program and became the Mentor Coordinator. She became a Companion in May 2018 and joined the Grand Grove as Grand Almoner in late 2018. In September 2019 she became the Archdruid of Fire, advancing to Archdruid of Water in March 2020. Her Druid path combines the ecological with the spiritual through her gardening practice, her Stream Team work with the local creek, and the Dolmen Arch practices she learned from taking the course. Having completed the Dolmen Arch course in summer 2019, she is qualified to teach it to others.

Archdruid of Fire and the Preceptor of the GCC: Kathleen Opon 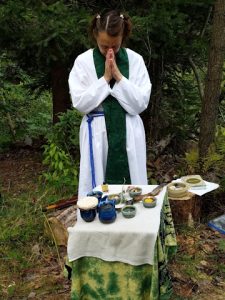 Kathleen has been a member of AODA since early 2015. Her personal spiritual journey began in Catholicism; traveled through the mysticism of Eastern religions; wound through the earthy wonder of Nature Based Religions; eventually arriving at her spiritual home in contemplative Druidry, the AODA and the GCC. As a Druid Apprentice Kathleen became an AODA  Mentor. After advancing to the Companion Degree Kathleen developed and coordinated the AODA Member Outreach program and earned the title of Grand Almoner. A deep desire to serve the spiritual needs of the Druid community-led Kathleen to the Gnostic Celtic Church, where she became a Deacon in 2017 and an ordained Priestess in 2019. Since early 2019 she has been training with the preceptor of the GCC to gain the skills needed to assist potential clergy in their discernment and formation process as well as ways to further develop the church and serve the AODA community as a whole.

As part of her work toward becoming a Druid Adept, Kathleen created and moderates the first AODA online Study Group and is working on developing a set of AODA specific Life Stage Rituals. A Contemplative Druid deeply interested in spirituality, Kathleen earned certification as an Interreligious/Interspiritual Guide in early 2020, with the intention of offering Spiritual Guidance services to members of the AODA, particularly those in formation to become GCC clergy, as well as to others who walk non-traditional spiritual paths. Kathleen has also completed the Dolmen Arch course, which she is now qualified to teach to others.

Since 2012 Kathleen has also been a member of The Sisterhood of Avalon, a Celtic Women’s Mysteries organization where she leads a monthly online Dark Moon/Dark Times Prayer Forum. She lives in Illinois with her husband, their two sons and two cats. 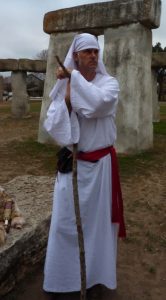 Timothy Whitmore-Wolf was born in Huntington Beach, California, were he fell in love with water from his first childhood tidal pool experience. Since then Timothy has lived in deserts, mountains, forests, and on the plains and took the lessons of each ecosystem to heart. When he is not staring at the world with wild eyed amazement, Timothy can be found working his farm in the Texas Hill Country. 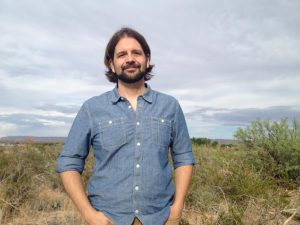 Adam has been called to a spiritual connection in the natural world since childhood. After searching for ways to explore that connection through the lenses of Christianity, Taoism and Paganism he eventually found a home in Druidry. After a long Candidacy, he was initiated into the AODA First Degree on Alban Hefin, 2015 and is currently working on his Second Degree.

Adam grew up exploring the canyons, deserts and wide open skies of New Mexico. He currently lives in Oakland, CA and is exploring urban sustainability, pollinator protection, and the streams and forests of his adopted home. 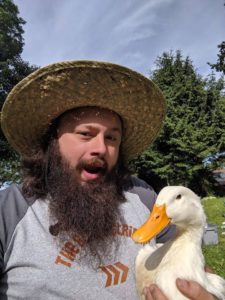 Robert Pacitti was born in Philadelphia, Pennsylvania and has been drawn to the spirit of the forest since he was a young boy.  Trained as a classical musician, Robert spent many years as a music teacher and show designer before moving into the private sector.
Robert has been a member of AODA since 2013, feeling a deep calling after reading John Michael Greer’s The Druidry Handbook: Spiritual Practice Rooted in the Living Earth.  Since then, he has been an active member of the U.S. Druid community in several facets, serving as the Deputy Editor for the online magazine Druid Magazine and recently completing his first publication with AODA as Layout Editor for the Trilithon Journal. He has served as Event Manager and now Director of the MAGUS Druid Gathering in Gore, Virginia, and also serves as a council member for the Becoming! Awakening! Manifesting! (BAM) Druid Gather in Western Massachusetts.
In his free time, Robert enjoys cooking, studying magic, and spending time on his homestead in Western Pennsylvania with his extended flora and fauna family. 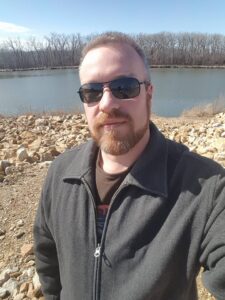 Jack Campbell grew up surrounded by the fields of rural Iowa and now strolls the banks of the Kansas River. He jumped headlong into nature-based religion and found a spiritual home in druidry. Jack is an AODA Druid Companion, and his Adept project involves the exploration of Earth-based spellwork using herbs and sigils. His interests include the intersection of the occult, religion, and magic. Jack is a Deacon in the Gnostic Celtic Church, a Dedicant of Ár nDraíocht Féin: A Druid Fellowship and an Ovate in the Druidical Order of the Golden Dawn.

Jack writes dark fiction and poetry and holds masters degrees in literature and fiction writing. He lives with his wife, son, and their vegetarian pitbull 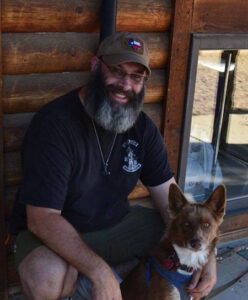 Ed was born in West Virginia and raised in both West Virginia and Missouri. He has an affinity with the forests of both the Appalachian and Ozark Mountains. He has always found a way into nature since his earliest memories. He currently resides in the “Cowboy Capital of the World” Bandera, Texas with his wife Susan, also an AODA member, and various critters. He is a lifelong conservationist, especially in animal husbandry, and an amateur birdwatcher. He has experienced everything from the arctic tundra to the desert to tropical rainforest and everything in between throughout his travels around the world, and he loves them all.

He is a Bardic Apprentice and has been in the AODA since 2018. He is a Deacon in the Gnostic Celtic Church. He chose the AODA over all other druidic orders because it allows the spiritual practice of the craft of Druidry while maintaining your own personal religion, whatever that may be, if any. 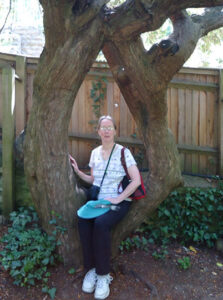 Karen Fisher, a Druid Apprentice in AODA and an Ovate in OBOD, has been a professional freelance copyeditor since 2003. A longtime pagan who cherishes the forests and streams and seeks sacred places, she lives in a big old house in Pennsylvania.