The Ancient Order of Druids in America, in conjunction with Starseed Press, has launched a publishing program to bring out books relevant to our traditions and study program. Several books relevant to our work are also published by Weiser Books, and a correspondence study program is also available to members and nonmembers interested in traditional Druid Revival spirituality.  We also have information on the Dolmen Arch Study Program. 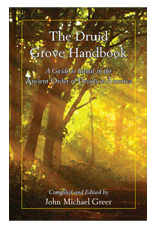 Compiled from the records of the Ancient Order of Druids in America, and edited by the AODA’s Grand Archdruid Emeritus, widely read author and environmental blogger John Michael Greer, this book provides a detailed survey of the evolution of AODA’s ceremonial traditions, and the complete rituals for opening and closing a Druid grove, initiating candidates for membership, and celebrating the solstices and equinoxes, the four primary holy days of the traditional Druid year. 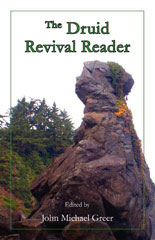 An accessible and engaging introduction to contemporary Druid nature spirituality by the current Grand Archdruid of an American Druid order, The Druidry Handbook offers a hands-on guide to Druid methods of meditation, seasonalcelebration, and living in harmony with the green Earth.

In the midst of the eighteenth-century Enlightenment, a handful of British intellectuals turned their backs on the social and cultural trends of their time and set out to reinvent the spirituality of the ancient Druids. The movement that rose out of this effort played a central role in struggles for cultural identity in most of the Celtic nations of Europe, provided inspiration to such world-class creative talents as William Blake and Frank Lloyd Wright, and inspired an innovative tradition of Western nature spirituality that remains active to this day. The Druid Revival Reader provides the first collection of original writings from that movement. Its selections, beginning with William Stukeley’s survey of Druid theology from 1743 and ending with Ross Nichols’ 1947 essay “An Examination of Creative Myth,” cover two centuries in the life of an evolving tradition.

Edited and introduced by contemporary Druid John Michael Greer, The Druid Revival Reader is essential for understanding the sources of modern Druid and Pagan traditions, and offers a wealth of insights relevant to the ecological and spiritual crises of our own time.