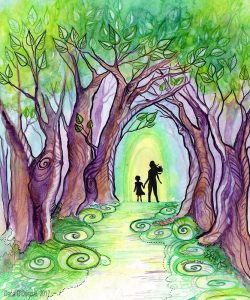 Many AODA members prefer to work in a solitary form, while others prefer the companionship of other druids. The AODA offers three kinds of groups for its members:

AODA Groves are officially chartered groups led by an Adept. As such, Groves can initiate Companions, Candidates, and Apprentices into the order and offer advanced mentoring and support for members. Groves are required to celebrate the solstices and equinoxes, and use the Order’s Grove opening and closing ceremonies.

AODA Study Groups are officially chartered groups, led by Companions in the AODA. As such, study groups can initiate Candidates and Apprentices into the order. Study Groups are encouraged to celebrate the solstice and equinoxes and to use the Order’s Grove opening and closing ceremonies.

AODA Home Circles are informal groups where AODA members and friends come together to learn more about the bardic, ovate, and druid arts. Any member of the AODA, regardless of standing, can form and lead a home circle, and for those who feel called to offer space for community and mutual growth, we strongly encourage it.

If you are interested in establishing a Home Circle, Study Group, or Grove within the AODA contact the Grand Grove at info@aoda.org.

Led by Kathleen Opon, Druid Adept and Archdruid of Fire. oakandether@gmail.com. Open to new members, but only operating on the AODA forum (no meetings at this time). Currently seeking a Companion level AODA member to take over the running of the group.

Led by:  Larry Keyes, AODA Apprentice LEKeyes@hotmail.com
Meeting on the second Saturday of each month to share learning and practices of druidry in the context of the AODA.
URL: https://www.minds.com/groups/profile/971862969221361664/feed
Facebook Group: https://www.facebook.com/groups/329542514376234/

The Circle of the Great Aspens and Reeds, Kaysville, UT